I realized that Two Steps From Hell does not only create epic music. They do very well with these types of film pieces as well!

Something nice and short to keep you entertained.

I’ve always been a fan of the college students or “hobby musicians” that posted their songs on Youtube, but it was only after a conversation with a friend of mine about Kurt Hugo Schneider that I thought of writing a blog post about them. I envy not only their musical abilities but also their great success on Youtube, and of course their resources that allowed them to produce such great works. If you don’t know them already, do check out their channel.

Here is a list that I think will keep you busy for a while: Sam Tsui, Christina Grimmie, AHMIR, Jake Bruene, Megan Nicole, Dave Days, Tiffany Alvord. Many of these artists will soon or already have their own record labels and albums. Perhaps not the type of success that I would want, but a musical success nonetheless. I have nothing but respect for these people. Except Tiffany Alvord. I think she’s also extremely cute.

My new MIDI Controller, after all the hassle of life, was finally ordered and received. Now, I can start composing once more!

For the few weeks that I’ve been without a keyboard, I didn’t stop doing musical activities. I did scores studies and transcriptions, which made me much more fluent in transposition. I plan to keep on doing more with just pencil and paper, as I have realized it can teach me quite a lot.

Here is an image of my current setup: 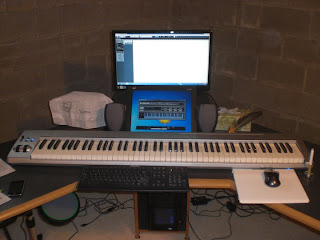 Back to composing for now. I have to make up for the missed time!

Perhaps I’m past the age for Disney movies, but this movie’s a different story. For some reason I find the music in this movie better than any other Disney movie I’ve seen. Perhaps it’s because the music is the work of Hans Zimmer, but I still hold, after all these years, a particular liking to the music of this movie. I’m not religious, but I don’t think that really matters for you to enjoy these songs.
The longest running show on Broadway to date. Second-longest on West End. It is the highest grossing musical theater production of all time. I speak of none other than… Yes, I realize there’s no point being dramatic when the title already says it all, but come on! It’s the Phantom of the Opera! This is the masterful creation of Andrew Lloyd Webber that has grasped the hearts of millions of people worldwide. Its haunting yet beautiful music connects with your heart no matter who you are.

Personally, I fell in love with the story after watching the film version for the first time. Since then I have seen the movie countless times and have seen the production in Broadway. If you have not, go see it on Broadway. It is definitely one experience you will never regret.

The music itself is so well crafted that it pulls at my emotions no matter how many times I listen to the songs. Perhaps it is because I have a personal story entwined with each and every one of them, or perhaps it is because the story of the Phantom is simply so memorable. Whatever the reason, I know I will never get tired of listening to these songs.

And for the fellow Phans out there who don’t know about it yet, there is a sequel by Andrew Lloyd Webber currently on West End called Love Never Dies. The soundtrack is just as haunting, but I have heard the plot has received bad reviews. Perhaps the composer’s major revisions that took place not too long ago changed the opinions, but nonetheless I plan to go see it on Broadway.

What can I say? Howard Shore created a miracle with the trilogy.

It’s over, and it truly was a Music Experience. Working with Jim Papoulis and Janet Galvan, I learned so much about everything from singing and conducting to composing and publishing music. The chances I had to talk to Jim Papoulis personally was not only enlightening, but he himself is an inspiring figure for me in the fact that I could one day be like him. I also made many new friends during the week, and I plan to keep in touch with many of them.

I don’t think the energetic melodies will leave my head for a long while. It was a week to remember for the rest of my life.